Previous Next
Buckets N Boards Delivers Innovation for All Ages 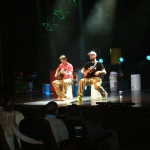 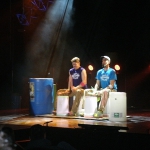 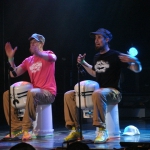 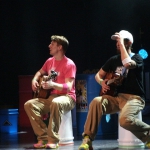 Am I Sacrificing my Fun for the Kids?

Like all parents I often sacrifice my own fun for the sake of my kids, which is what I expected with Buckets N Boards, but not what I got. After all, it’s billed as a comedy percussion show and the brochure shows two young guys in whacky get-ups jumping around, wearing goofy wigs and shoving things up their nose – who wouldn’t think it’s a juvenile show (appealing only to juveniles)?

I’ve been aware of Buckets N Boards, playing at the Clay Cooper Theatre in Branson, for a few years now, but always managed to side-step it for a show I thought would still be fun for the kids, but fun for Mom and Dad, too – I spend a lot of money when I take my family to a show and want as much bang for my buck as I can get. Just a few days ago, over Spring Break, we “sacrificed” and went to Buckets N Boards – all I can say is WOW!

Talent of Matt and Gareth for All Ages

Sure the kids loved it, but so did the adults. The two man show of Matt Levingston and Gareth Severs delivers on every level. Sure it’s sometimes loud (Hello… It’s Percussion), there’s juvenile antics, jumping around, and crazy cornball comedy… And I loved every minute of it. As expected, my 10 year old said Buckets N Boards was the best show we saw over Spring Break, and I must agree, it was pretty exceptional. These two guys have Charisma plus. They are wickedly talented in percussion, comedy, dance, and music (both sing well and play instruments). I think now, having seen the show, I would say it’s not juvenile – it’s innovative!

Over and Beyond at Intermission

I’m sure I’m not the only parent or grandparent to have been won over. At intermission, both performers made themselves available in the merchandise booth, and intermission ran long so that everyone could get that personal experience with the stars – something I’ve always appreciated in Branson shows. The littlest kids wanted to get an up close experience, older kids wanted to get their own drum sticks and learn to be like them, and the teens and adults just wanted to hang out with two awesomely cool dudes.

My suggestion to readers, especially readers with kids – find a way to see this 2PM show at The Clay Cooper Theater. Buckets N Boards performs out on tour as well, so it is only in Branson in March, June, July and August, and it doesn’t play every day. If you can see them in Branson, or catch one of their shows while touring, do it – you won’t be disappointed.