The very famous Silver Dollar City grew around the entrance to Marvel Cave, one of the greatest wonders of nature. Included with your admission to Branson’s favorite theme park, you’ll also get access to this unique cave with a storied past.

In approximately 1500 AD, the Osage Indians discovered the cave, and hearing strange noises coming from the depths, feared it and never entered it, naming it “The Devil’s Den.” Later, Spanish explorers entered the cave looking for riches and the fountain of youth. Other explorers followed, some searching for mineral deposits. The possible discovery of marble led to an interest in the cave and the renaming of the site to “Marble Cave.” It was subsequently renamed again, to its current name, Marvel Cave, as interestingly, no marble was ever found, just bat guano.

In 1894, the cave was opened as an Ozarks tourist attraction by Canadian entrepreneur William Henry Lynch, and his two daughters, Genevieve and Miriam. During its first 50 years, it operated as a tourist show cave. Then, in 1950, Danish immigrant Hugo Herschend, along with his wife and sons, leased the cave and introduced the Silver Dollar City theme park in 1960. The theme park was built around the entrance to Marvel Cave and on top of the foundations of an 1800s mining town.

When you visit Silver Dollar City, you’ll enjoy a tour of Marvel Cave as part of your admission ticket. The cave is a wet limestone cave, where you’ll find live, growing cave formations inside. Tours of the cave depart about every half hour (weather permitting).

At the beginning of the cave tour, you’ll go 300 feet below the surface, where you will enter the breathtaking Cathedral Room, which is actually the largest cave entrance room in the United States. Along the 60-minute tour, you’ll climb several hundred stairs (This tour is not recommended for those with lung/heart conditions, bad backs, weak ankles or knees). During the tour, you’ll be regaled by interesting, entertaining facts of geographical and historical importance by the trained guide. After descending 500 feet, you’ll travel back to the surface on a cable train that will take you the half mile back to the top!

Marvel cave also offers other Branson, Missouri cave tours like the Lantern Lights Tour where guides dressed in period costumes will take visitors on a 90-minute nostalgic tour of the Mammoth Room. Highlights of the tour include the bat wall and the only known “Spanish ladder” left in the cave. On the tour, you’ll be regaled with colorful and historical stories!

If you want to take advantage of these exhilarating cave tours in Branson, MO we would be happy to help you with arrangements. Our staff at Sunset Nightly Rentals is dedicated to making sure your vacation is memorable, exciting, and fun! Give us a call today to book one of our vacation rentals and to learn more about our specials on Branson cabins for rent. 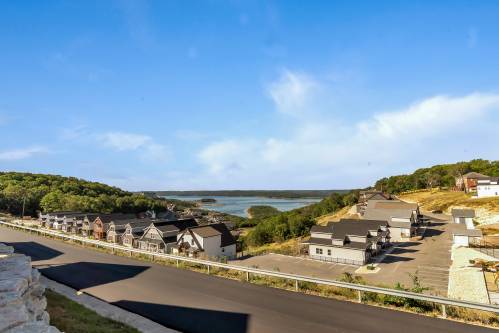 Looking for the perfect vacation spot for the entire family? Chateau Mountain is the newest resort with amazing Table Rock Lake Views.